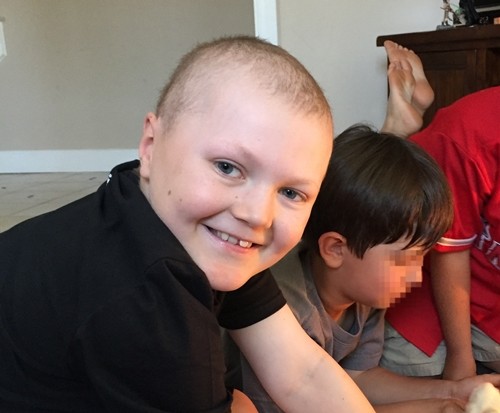 On New Year’s Day, 2010 four-year-old Gavin was diagnosed with acute lymphoblastic leukemia (ALL), and his family’s lives were forever changed. Prior to his diagnosis, Gavin had suffered from a cold that wouldn’t go away and recurrent ear infections. During the Christmas holidays, he had such a severe ear infection that he had to have surgery. Following this surgical procedure on December 30, 2010, Gavin was in recovery when a pediatric oncologist told his parents that his 75% of the cells in his bone marrow were leukemia cells. Gavin had pre-B acute lymphoblastic leukemia (ALL). Gavin’s chemotherapy treatments began the next day.  The prognosis was very good but the treatment process included 6-8 months of chemotherapy, followed by three years of “maintenance”.  “Seeing your child strapped helplessly to a gurney while there is absolutely nothing you can do has to be one of the hardest things in the world,” his mother Kim said.

Gavin received the news in 2014 that his cancer had returned.  He has gathered up his resources joined a cutting-edge protocol and is fighting with all his might.  Thanks to the support of his friends on the UC Irvine Baseball team, his own Little League Team, and Hall of Fame-ers like Rod Carew, Gavin is backed by an all-star team!

“The pain and worry of other parents, the horribleness of this disease, the fact that it still exists in gruesome forms never ends for me,” Kim states. “I worry about how the oncologists do it, how the PCRF folks manage to do what they do.  They say that it is the “Gavin’s” who get them through … the success stores.  “I’ll continue to work with PCRF to spread awareness.”

Update as of March 2021: If you aren’t familiar with Gavin’s story, he is a three-time cancer fighter. Because of the power of research, Gavin is doing great! He still visits his CAR-T team in Philadelphia periodically – where he is enrolled in a life-saving clinical trial. His doctors here in CA continue to monitor him for late treatment effects.

Your gift could make all the difference.